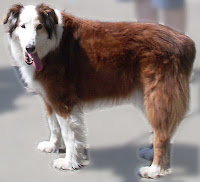 Years ago, when Maverick was still with us and was about 9 years old, I taught him to fetch the paper from the top of the driveway. It wasn’t too hard, since he loved to play fetch, but it wasn’t easy either. It took 2-3 weeks for him to get the idea that he was supposed to get the paper without someone throwing it for him first. Even then, he was never all that reliable about it. Still, it was fun for him and we kept doing it for a while until my Dad came back from Iraq and took over the job.

Yesterday, I noticed that my parents’ paper was at the top of their driveway and I suddenly remembered back to when Maverick used to bring in the paper. I called Harley to me and sent him to get the paper. He’s never been trained to fetch the paper, but he’s always being sent to fetch stuff we’ve dropped… TiVo remotes, dropped water bottles, rolls of tape, stray bills, etc. He’s pretty savvy about finding the one item among many that you want. I don’t know how he does it, but he gets it right on the first try more than half the time.

This time, he trotted to the top of the hill and looked around, but couldn’t figure out what I wanted. So, I walked up closer. As soon as I got within six feet of the newspaper, and he could clearly see where I was pointing, he grabbed the paper and trotted towards me.

I expected him to bring it to me and demand his usual payment, a dog treat, but he kept going. He headed right for the front door where he waited patiently for me to unlock it. Then he carried it into the house and dropped it only when he got to the back of the couch. By this point I was encouraging him to take it to Grandmom, which is a command he’s familiar with. He got really close, too. I think he would have made it, but he got distracted by the other dogs jumping on him.

Harley did this as if it were as natural as breathing. Something that took Maverick weeks to learn, and Maverick was not a stupid dog, Harley just did without being taught. You know what? It doesn’t surprise me at all. It’s just the kind of thing he does.

I told him this morning that we would play laser tonight. He was waiting for me tonight, twice as excited as usual. I don’t think he remembered, but with him it’s hard to be sure. However, when we left my mom’s house, I told him we would play laser when we got home. I know he remembered that, because the instant we got in the house, he ran downstairs and headed for the cabinet where I store it and was staring at the drawer when I came down behind him.

I’m telling you, he’s an alien in a dog’s body. A really, really cute alien. Who likes lasers.