Home Harley Dog in a Manger

Dog in a Manger

I was a little over-generous with the dog’s feeding tonight and Harley and Scooter were both left with more than they wanted. For Scooter it was no problem, she went off to enjoy the rest of her evening. However, Harley, like the dog in the fable couldn’t do that. He hovered over his handful of kibble and guarded it as if it were the treasures of Solomon. It wasn’t as if the others were interested, they were full and happy and were pursuing other interests. Harley just couldn’t let go until I stepped in and freed him from his self-imposed guard duty. 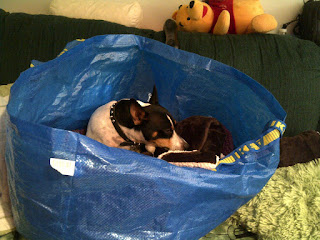 It got me to thinking about the ways we put ourselves into bondage to stuff, territory or people we no longer want just because we can’t stand to see someone else benefit at our expense.

Earlier today Mom and I were getting to her house just as her neighbor’s church group was arriving and trying to find parking spots. One of them had parked across the top of Mom’s driveway and we had to wait for him to move his car. It only took a moment, but it was annoying. I got out at the top of the driveway to put something in my car and then walked down into the house. I thought of taking my car down, but some perverse part of me didn’t want to give up MY parking spot to the people who had inconvenienced us, even for a minute.

It was a silly, petty thing to do, and like Harley with the food tonight, it caused me more grief than it did them because I had to go back to get the car a moment later to load up some stuff to bring home. By getting all territorial and petty, I wasted time and energy for nothing.

Back in college, I took a Sociology class and found it fascinating. For instance, I learned how we tell each other which way we’ll pass in the hallway. (We briefly make eye contact and then glance down to the left or right.) I learned how to make a new acquaintance think better of you. (Ask them to do a small favor for you. Weird, huh?)

One study I remember vividly was the one about parking spaces. As I recall, they first surveyed shoppers about how long it takes them to leave a parking spot when there are no cars waiting and how long it takes when someone is waiting for their spot. The majority of people reported that they hurried to leave more quickly if someone was waiting. Then they studied actual behavior. (Sociologists never trust anyone.) It turns out that a significant percentage of people actually take longer to leave the spot if someone is waiting. They theorize that it’s a territorial impulse. Like Harley, they want to hold onto what they’ve got, even if they don’t want it anymore.

I don’t know what is in my manger, but I’m going to be thinking about this for a while. I don’t want to be bound to something, someone, or somewhere that I no longer want or need just to keep someone else from enjoying it instead of me.

What’s in your manger?